When the National Hockey League awarded an expansion franchise to Atlanta Hockey, Inc. on November 9, 1971, ice hockey was an unknown entity in the land of Bulldawg football and Braves baseball. The mere mention of ice sends panic rippling through Southern minds—rightfully so—and the thought of someone actually skating on that surface while attempting to play a game that seemed the combination of basketball, soccer, and roller derby provoked extreme skepticism. When Bernie “Boom Boom” Geoffrion was signed as Head Coach of the new franchise signed in May 1972, the news received little notice in Atlanta. The naming of a coach for a nameless hockey team meant little to those in the South. 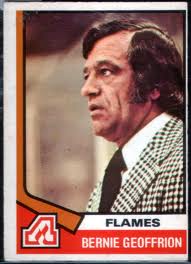 Geoffrion immediately bonded with the South. His gruff, authoritative disposition and flair for success impressed a town conditioned to mediocrity in its professional sports. The native of Montréal, Quebec, promised excitement on the ice, at the very least.

And so it was that a first-year expansion team, whom experts had predicted to win just three games all season, set a league record for points earned by an expansion club and impudently challenged and demolished traditional NHL powerhouses. When the experts questioned the reasons behind this unprecedented success, the finger always pointed towards Bernie Geoffrion.

Geoffrion maintained that he was not surprised the team won games. Rather, he was surprised that the collection of veterans and young players quickly coalesced into a team. Geoffrion liked to brag that there were “no superstars on my hockey club. My boys stick together.”

When it came to ice hockey and the Flames, Geoffrion was satisfied with nothing less than success. At practice, he could be found on skates, standing in the center of the ice, whistle in mouth, regulating the team’s activities by the high-pitched notes. At the first sound of the whistle, players began to circle the rink slowly, rhythmically, sticks held as a tight-rope walker clutches a baton for balance. Another note increased the speed. Bodies began to bend over, sticks began to move back and forth quickly in front of the players to aid speed. Unemotionally, Geoffrion sounded yet another note. The speed increased dramatically. Skates moved faster and faster and faster until the bodies blended together, encircling the rink and Geoffrion in a red and gold blur.

A final note sounds, and the skates abruptly twist sideways, spraying ice high into the air, stopping the players in their tracks. An instant later, they’re headed in the opposite direction, responding to the sound of the whistle. A previous night’s loss always left the Boomer disgruntled, and he would warm his players not to eat before practice. Pucks were dropped on the ice, and players began taking shots on goal or moving the pucks up and down the ice. Geoffrion was not content to observe. Grabbing a stick, he would join the players. A quick flick of the stick and Keith McCreary found the puck he had guarded so preciously just a moment before moving up the ice with the Boomer. A series of sharp moves faked the skates off Rey Comeau and Boom Boom had his puck. Rookie sensation Jacques Richard was slammed into the boards, wrestling briefly before surrendering rights to his puck. And so Boom Boom continued, methodically defeating star and novice alike, stealing the puck from men twenty years his junior.

Next, he turned to the men who guard the nets. “Take me on!” he’d taunt goaltender Phil Myre or Dan Bouchard. Seven pucks lined the blue line, and Geoffrion began to fire in rapid succession. The pucks whistled off the stick, moved at a velocity that gave credence to the claim of 100 miles-per-hour, and flew at Phil Myre, who held the lead in Goals Against Average most of that season. The first shot missed the net and slammed into the boards with the resounding boom that many years before had earned Geoffrion his nickname. The second Myre warded off with his glove hand. The other five were in the net before Myre could move.

Watching, many wondered why this man was no longer playing, 42-years-old or not. It was obvious why he was once the most feared man in the league, was fifth on the all-time scoring list in 1972, and why he was inducted into the Hockey Hall of Fame in August 1972.

After a highly successful 16-year career with the Montreal Canadiens and the New York Rangers, Geoffrion retired to coach the Rangers. Midway through the first season, he was forced to resign when plagued by severe stomach ulcers. Three years later he accepted the post with the Flames after promising his wife Marlene he wouldn’t become sick again.

The transition from French Canadian to Southerner found favor with Geoffrion, whose omnipresent French accent contrasted sharply with the Southern drawl. Atlantans adopted Geoffrion as a hero, commonly greeting him with ten-minute standing ovations at speaking engagements. He was accorded respect, and—inconceivable in Atlanta—little second-guessing by local media.

In its very first season, Geoffrion’s Flames competed for the Stanley Cup Playoffs, in contention until the final games of the season. Club officials had hoped to sell 2,000 season tickets that first season. Ten thousand season tickets were scooped up by the novice hockey fans, leaving just 5,000 seats available for single game tickets. “Get your tickets before the freeze,” a tag line before the inaugural season had begun, turned into a prophecy as fans were turned away by the thousands.

Geoffrion saw his role as coach as instilling confidence in his players. Confidence was key to his—and his Flames’—success. Would that formula work today—the ability to command respect, dish out humility when necessary, and ensure the players’ confidence in themselves and their coach? Perhaps. This much is certain: Bernie “Boom Boom” Geoffrion and his first-year expansion team made believers of the NHL and ignited hockey fever in the South that memorable season 47 years ago.

A final note—In those days, sell-out games did not guarantee financial success. There was no national—or even regional—television revenue, there were no NHL-wide promotions, no Winter Classics. There were just teams like the Flames with a loyal base of fans who would pack the arena game after game, and still lose money. The Flames had no Ted Turner to rescue the team and keep it in the South. Many hearts were broken the day the Flames left the Omni for Calgary. Geoffrion and many of the original Flames made their homes in Atlanta, staying long after their coaching and playing careers were over.

When The Boomer lost his final match—with cancer—on March 11, 2006, those same hearts broke again. Atlanta had lost a legend and more importantly, a beloved friend.