It may be hard to believe, but not that long ago—at least in my perspective!—writing sports was strictly for the guys. No way could a girl know enough about professional sports to conduct an interview or write intelligently. How in the world could a woman know the difference between a fastball and a slider; offside and icing; first downs and pass interference? And even if she could carry on an intelligent conversation about the Montreal Canadiens’ chances in the Stanley Cup Play-Offs, no female could—or would—or should actually write about it. Back in the early ’70’s, however, women began to tear down that brick wall and overcome the stereotypes that had kept them away from sports. They actually dared to write about sports, interview players, demand access to the locker room (horrors!), just like the guys.

In those days, while in college, my best friend and I covered sports—particularly baseball and hockey—for the local paper, the school paper, and occasionally an Atlanta-wide publication, Creative Loafing. We were among the few women who dared to enter that “Men’s Club.”

Undeterred (and a bit naive), we scored interviews with legends such as Johnny Bench, Ferguson Jenkins, Bernie “Boom Boom” Geoffrion, Jacques Richard, and Tommy Lysiak. We even managed a trip to the 1973 Stanley Cup Final, in Montreal, cheered for the visiting Chicago Black Hawks—and survived to write about it. (But that’s a story for another day!)

Many years later, the clippings have yellowed, the stars long retired, but the dream lives on, only in a different genre as a romance author. Occasionally I’ll post some of these long-forgotten articles—hope you enjoy them as much as we enjoyed our times as “groundbreakers” in the world of sportswriting.

The following recounts the day we broke the barrier that prevented women from stepping onto the baseball field as a “member” of the team. We were “Batpersons” for the Savannah Braves, the then-Double-A Atlanta Braves’ minor league team.

Confessions of a Minor League Batperson

It’s a generally accepted fact that if you’re going to make it to the Major Leagues, you’ll first need to put some time in the minor league system. This doesn’t apply only to the players. Managers,
coaches, front office personnel, and even umpires have to work their way up through the minors. It’s only the rare individual who actually launches a professional career in the majors, but that’s what makes superstars anyway.

Knowing this basic axiom of baseball—and knowing that we weren’t likely to be superstars—and having as our goal becoming baseball’s first feminine batpersons, neither of us was particularly displeased at the thought of starting our career somewhere in the minor leagues. Actually, we considered ourselves quite lucky—we were making our debut at the AA level, bypassing the Rookie and Class A leagues. We were starting in an organization we’d long dreamed of joining—Savannah’s version of the Atlanta Braves.

Surely the Savannah Braves‘ General Manager was only half-serious when he invited us to be honorary batpersons at a late-season doubleheader against the Columbus Astros—or he felt sorry for us spending a month in Savannah organizing a Telethon and felt we deserved some excitement. Either way, we said “Yes!” before he had time to realize what he’d gotten himself into.

Knowing he’d been hooked, he decided to make the best of it. He got us genuine team jerseys, right off the backs of two of Savannah’s stars, took us down to the dugout, introduced us to a couple of the players, then left us to navigate the basics of the bat trade ourselves.

No sooner had he had left the dugout, the skies opened and a deluge descended on Grayson Stadium. Our debut was about to be washed down the drain, along with the muddy streams flowing down the dugout steps. Worse, we were trapped, not wanting to get soaked or risk walking through a clubhouse full of possibly partially clad players. As it was, we had to contend with the questioning stares of each Savannah Brave as he entered the dugout and saw us sitting (unobtrusively, we hoped) on the bench.

“Hey, what are you doing with my jersey on?” catcher Biff Pocoroba demanded as he caught sight of Jenny’s number 12 jersey.

“That’s the new catcher,” someone informed him.

“Oh, and I suppose you’re the new pitcher?” another added sarcastically with a glance at me.

We explained that we’d been recruited as batpersons for the doubleheader, and the conversation immediately switched to whether or not one of us would have to fetch bats for the visiting club.

“No way—let them find their own batgirls,” one player answered.

“Batperson,” I repeated. “As in a person who carries the bat.”

By this time the rain had let up and it was time for the players to start warming up. Deciding to be nice to us, two players invited us to play catch. It kind of surprised them at first to see that we knew which hand the gloves went on and that we could throw the ball to them without bouncing it first (usually), but pretty soon they got used to us and even began to offer “helpful” hints.

“You’re letting the ball go too soon,” my coach advised. “Try throwing it this way.” Trying it this way caused the next throw to go into the dirt, but he assured me it would be better once I got used to it.

Jenny, meanwhile, had decided she’d rather be a pitcher than a catcher and received instructions on how to throw curve balls, knuckleballs, sliders, and spitballs.

It was nearing game time, so we reluctantly ended our games of catch and instruction to meet with the regular batperson to learn our duties.

“You can do what you want,” he informed us. “I’m going to work for the other team tonight.”

“You mean you won’t be helping us?” We panicked.

“Aw, you can handle it,” he assured us with a disdainful wave of his hand. “One of you can be in charge of the bats and the other can take care of the helmets. It’s easy. You get the bats off the field between batters and put the helmets back on the roof. What could be easier?”

Indeed, What Could Be Easier for a Batperson?

“I call helmets,” I whispered quickly. Jenny flashed one of those looks that could kill and would have retorted something fairly unbecoming a batperson had Manager Tommie Aaron not chosen that moment to enter the dugout.

“You’re the kids they sent from Greenwood?” he demanded incredulously.

“You can play third base?”

“And you can play first?” We nodded agreeably. “And you can hit third?” He took a pencil from his pocket and prepared to fill in the line-up card. “Now, what are your names?”

“Oh.” Manager Aaron seemed genuinely disappointed we weren’t the kids from Greenwood, but he completed the line-up card and started up the dugout steps toward home plate. “Come on along,” he invited Jenny.

Feeling a little insecure alone in the dugout, I wandered to the top of the stairs and pretended to see something truly fascinating out in left field. But compelling as the left field grass appeared in the 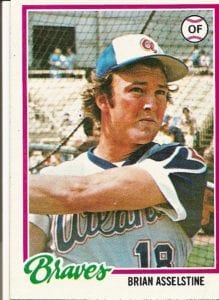 setting sun, I couldn’t help but hear the entry of another player to the dugout, preceded by a string of profanities put together in a way I’d never quite heard before.

“And that goes for you, Asslestine!” he growled, not two feet behind me. I turned to see what had prompted this outburst just in time to see a player turn pale and gasp in shock. “You’re not Asslestine.”

“But you’ve got his jersey on,” he protested, pale skin quickly becoming crimson. “I thought you were Brian…”

“Well, our hair is the same color,” I tried to reassure him.

By this time Manager Aaron had returned from the meeting at home plate and he sternly warned his team to “mind your mouths” in our presence.

“Want a chew?” he offered, holding a bag of tobacco before us.

“No thanks, not right now,” Jenny declined politely.