TBT—Those were the days of America’s Team

TBT… Recently came across this blog post, originally published four years ago. The Falcons at that time were poised for a Super Bowl run, with “Matty Ice” as the team’s wonderfully refreshing quarterback. Then, some reporter from ESPN actually had the nerve to proclaim Atlanta The Worst Sports Town in America.

Wonder if he even remembers his inflammatory article? In the four years since, Atlanta has had to endure promises of championship runs, but always falling short… the Falcons, the Hawks, the Braves.

FourStill, Atlanta is enough of a sports town that both the Falcons and the Braves currently are constructing new stadiums. The Braves went way outside-the-box by choosing to relocate to suburban Cobb County. Statistics pinpointed exactly where the most ticket sales originated—and decided to relocate in that area. (Perhaps the success of the AAA Gwinnett Braves in another suburban Atlanta county had something to do with the decision.)

For this weeks’ TBT, hope you enjoy a look back on an article that sparked outrage in these Southern Hearts:

A Word (or two) from “the Worst Sports Town in America”

Not too long ago—actually January 6, 2012 to be exact—ESPN’s Rob Parker blasted Atlanta sports fans: “Without question, Atlanta is the worst sports town in America.” Seriously. Who is this guy—a New Yorker, no less—passing judgment on my home town and my home teams?

Further, he states, “When it comes to sports, no city is as cold to warm up to its home teams. And it’s just not when it comes to the NFL and the Falcons. All of their teams have suffered from terrible support.” Read the entire article here.

Parker even went so far as to state that the Falcons did NOT deserve to win its playoff game against the NY Giants because the Falcons “shouldn’t be allowed to win and reward some of the worst fans in the country. They just don’t get it. They are both missing in action and simply not passionate enough to appreciate their team winning in the NFL playoffs and moving on to the next round.”

Cold to warm up to its home teams? Missing in action? Not passionate?!?! For this Girl Raised in the South (GRITS to y’all Yankees), those are fighting words. 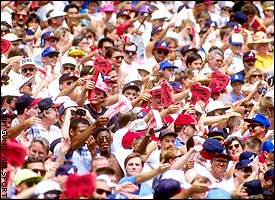 Let’s talk Braves baseball. You know, America’s Team. The Braves had legions of fans across the country beginning in the mid-’70s thanks to the old “WTBS-Superstation,” long before the Worst to First drive to the World Series in 1991. When the Braves accomplished the impossible, beginning an unforgettable 14-year run as Division Champions, those blasé Atlanta fans not only packed Atlanta Fulton County Stadium (and later Turner Field), tomahawks became part of the cityscape, showing up everywhere. If you don’t think Atlanta fans appreciated the greatest pitching rotation in modern baseball, the manager holding the record for most ejections (158, not counting post-season) and fourth in all-time in wins… well, you really could not have been covering Atlanta sports in the ’90’s. The worst thing that happened to the Braves came when Ted Turner joined forces with Time-Warner and lost day-to-day control of the team in 1996. Ted Turner had believed in the Braves enough to invest in talent, way before the team started its 14-year run. Turner brought Andy Messersmith to Atlanta as a free agent back in 1976, ushering in the era of high-priced free agency. He signed Greg Maddux in ’92, even though the Yankees offered more money ($6 Million more to be exact).

But when corporate America started to control the purse strings, the Braves salary levels dropped each year, eventually hovering around $80 Million, right in the midst of the team’s greatest seasons. This started a chain reaction of the Braves farm system producing outstanding talent who had great seasons with the team before being traded for “prospects” just because the new corporate owners wouldn’t pay to keep them. How many soon-to-be free agents did the Braves pick up mid-season, sacrificing great young talent, knowing that management had no intention of signing them after the season? David Justice and Marquis Grissom for a three-month Braves appearance by Kenny Lofton ring a bell? Mark Teixera? Rafael Soriano?

How else do you explain allowing Tom Glavine to go to the New York Mets? Not even offering Greg Maddux a contract before he returned to the Cubs in 2004 to capture win #300 and strikeout #3000 over the next two seasons? In the Ted Turner days, neither would have left, but again, Ted was willing to invest in the team, rather than set an arbitrary salary cap that just kept sending hometown heroes off to greener wallets. America’s Team’s baseball coverage is now is split among four regional television networks—leaving many former fans in distant markets totally out of luck. 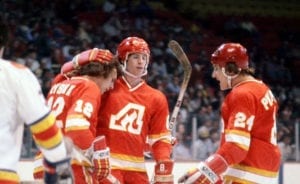 Let’s talk NHL Hockey. Parker alleges that Atlanta could not keep an NHL franchise because there was no fan support. Well, once your heart is broken, it’s really tough to get involved a second time. Back in 1972, Atlanta was invaded by an unknown entity. Ice Hockey. You see, there was a new arena, The Omni, a new professional basketball team, the Hawks (relocated from St. Louis), and the owners wanted to round out the experience by adding a hockey franchise.

That’s right—hockey in a town that is paralyzed with just the hint of ice or a snowflake. But, the Ice Age descended in the Fall of 1972, with a first-year expansion team, a coach whose name no one could pronounce, and a mélange of veteran and young athletes. When the season began, with sold-out crowds, the Atlanta Flames became the hottest ticket in town.  Sell out after sell out after sell out, Atlantans packed the Omni to watch their Flames win (and lose). They weren’t coming to watch the mighty New York Rangers, the hated Philadelphia Flyers, the despised Boston Bruins or the incredibly talented Montréal Canadiens. The Omni was Flames territory from Day One.

Of course, “Original Six fans” may scoff, but there was an endearing quality to Southerners who cheered the very first time one of the Flames stopped the puck behind the opponent’s goal, and the Public Address announcer had to explain the concept of icing. But the famed Southern hospitality went clean out the door the first time a fight broke out on ice—Atlanta had discovered a sport that was even more exciting than football. And the city was hooked.

Even though the city staunchly supported the team, without the revenue from major TV contracts, the Flames could not break even—no matter that the fans packed the Omni each and every game. The ownership was forced to find a new buyer. Fans begged Ted Turner to buy the Flames. The fans tried to put together a group to buy the team and keep it in Atlanta. But, here again the decision was made on a bottom-line basis. Hockey was gone, deflating the legions of newly indoctrinated fans—many of whom just didn’t have the heart to pass that love along to the next generation, who suffered the same fate when the Thrashers left for Winneppeg.

Let’s talk NBA. In the heart of ACC and SEC basketball, paying big bucks to watch the pros just can’t compare to the good old-fashioned excitement generated at the “Thrillerdome”… or compete with the determination, heart, and team spirit you witness in college hoops. If you want to see passion, come to the SEC championship or a Tech vs. Duke game. There’s nothing like college hoops. That’s not to say that the Hawks don’t have loyal fans—they do, even though they never seem to make it to the Finals. 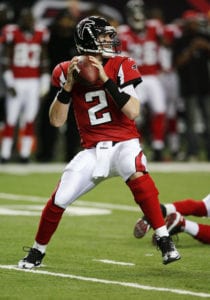 And now, let’s move on to the NFL. Like it or not, Atlanta loves and supports the Falcons. Sure, it took a committed owner like Arthur Blank, but the team has regularly played to sold-out Domes in recent years. And let’s not even get started talking about Michael Vick. The fact that the fans stuck with the team and embraced Matt Ryan—and supported them into three straight playoff appearances—speaks volumes on the loyalties of Atlantans.

If being “lame” means Atlantans don’t make a habit of booing the home team or shouting “You suck!” at the top of their lungs at one of their own players—or actually being polite to opposing fans who visit our ballparks, domes, and arenas… well, I’ll be lame any day, along with an order of that sweet tea and cheese grits.