All Things Considered, Two Out of Three Not Too Shabby 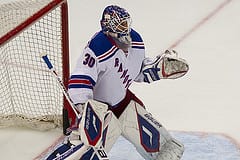 The stars aligned perfectly for this trip. It’s next to impossible to score tickets to see the Habs in the Centre Bell. Season tickets are passed from generation to generation. Flying from Atlanta to Montreal—rather pricey—and then there’s that issue of securing an affordable hotel. Serendipitously, an invitation to the Montreal/NYR game from a business associate, airfare courtesy of Delta SkyMiles, and a suite with Hilton Hotel points—the Perfect Scenario comes together.

Not to be ungracious, but really really hoped the seats would be in the lowest section with a primo view of the Canadiens goal—the better to watch King Henrik deflect and block shots for two of the three periods. Binoculars packed “just in case” our seats were in the upper levels. Taking no chances. 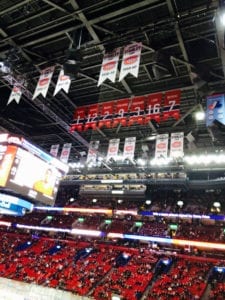 Walking into the Centre Bell, maneuvering the incredibly crowded concourse to our section (on the 100 level, no less!) could just sense the history and pride the team has provided Montreal for over 100 years. First glimpse of the arena—breathtaking. Scores of banners hanging from the rafters—retired numbers and Stanley Cup winning years—a scene unduplicated in any other NHL arena. The Habs display 23 Stanley Cup championship banners; the closest rival, Toronto Maple Leafs boast 13. 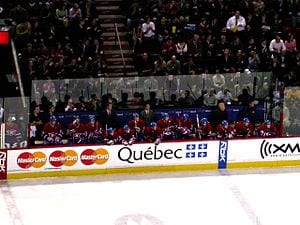 Our seats were perfect—lowest level, on the corner, about half-way up the section, great view of the net that Lundqvist would guard for two periods. No need for those binoculars. Worried a bit that I was not wearing the Lucky Green NYR Jersey—just couldn’t show disrespect amidst all that history—but hoped that an undercover Rangers’ Blue top would serve the same purpose. Due to the crowds, we missed the warm ups, but were settled in our incredibly great seats for the starting line-ups.

Shockingly, Henrik Lundqvist was not introduced as the starting goalie. Seriously? One of the toughest arenas to play in? Rangers’ coach Alain Vigneault (obviously clueless about this Bucket List weekend) chose to put rookie Cam Talbot in front of the goal against the Canadiens. Really, the back-up goaltender… who’s expected to start 15-20 games a year? This night? This game?

Definitely torn… should I hope Talbot surrenders about six quick goals so Lundqvist replaces him? Or do I just join the crowd and cheer for “Les Habs?” And where was Lundqvist anyway? Not on the bench…not on the ice. What gives?

Confession Time: Hoped that Talbot would surrender three quick goals and #30 would take his rightful place guarding the net. 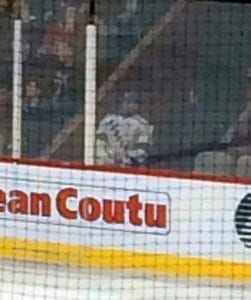 Finally located Hank about half-way through the first period. At first spotted what appeared to be a brave Ranger fan seated across the rink, first row center ice. Closer look—the binoculars did come in handy after all—Lundqvist was indeed on a stool just inside the glass where the team enters and exits the ice.

Although this definitely looked like a “Time Out” Stool, learned that the Centre Bell’s benches do not accommodate the entire team, when you count back-up goaltenders. So the goaltenders perch just behind the glass—adjacent to the bench for the home team; clear across the ice for the visitors. Wonder if the goalies feel like they are in exile? Is it hard to concentrate on the game when you are behind the glass, amongst the loud, incessant cheering crowd? However, Hank appeared focused whenever those binoculars found him. 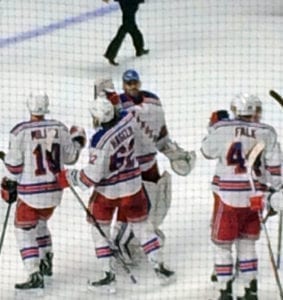 In the end, the Rangers won a 1-0 goaltenders’ duel. That rookie goaltender Cam Talbot was flawless, and King Henrik was finally able to take to the ice to congratulate him and the team.

Win or lose, the entire evening was a magical experience, a once-in-a-lifetime experience for this Southerner. As for the Bucket List, we’ll give it a two-and-one-half. Another road trip remains on the list to check off watching Lungqvist play (There are no home games in Atlanta). MSG in NYC, Nashville, Raleigh, Tampa all beckon.

Could be worse things to plan, right?

P.S. Following is the “Bucket List” compiled 20…maybe 30 years ago and updated occasionally. These are the sports-related things to accomplish before, well… forget you want to do them. After checking this out, it looks pretty good. But, still have a bit of work to get ‘er done.