Breaking Up Is Harder than We Thought; Chipper Jones’ Last Home Game

Friday night, September 28 is Chipper Jones’ last home regular season game…. Chipper Jones Night is a complete standing-room only sell-out, as expected. Of course, Braves fans are hoping to see him through the post season and deliver a second World Series Ring. Nice book-ends to a Rookie Season that saw the ’95 Braves capture the title. Chipper is in his traditional September groove, delivering clutch hits, scoring runs, playing like the kid we all remember.

Every park Chipper visited this year honored the future Hall of Fame member with video tributes, special mementos, and rousing standing ovations from the fans… yes, even the Mets’ fans. Friday it’s Atlanta’s turn to thank Chipper for the hustle, leadership, spectacular plays, walk-off hits, and genuine service to the community. Don’t worry; The Ted will be rocking, and predicting no dry eyes as #10 leaves the field for the very last time in a regular season game. 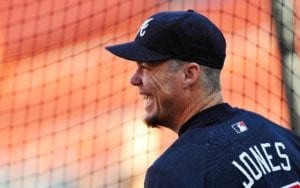 The following was originally posted this summer, when denial began to become reality. Now with the season down to a precious few games, the Braves headed for that one-game wildcard match next week—reality stares us in the face. Will this new generation of Braves deliver Chipper to the World Series? You just know that Chipper will do his part, producing the clutch hits, making those impossible plays at third, making all of us dream—maybe one more year, Chipper? But we know his decision is made—and Chipper will proudly clean his locker for the last time and leave the clubhouse sometime in October, having delivered… well, a Chipper Jones kind of year. In case you missed this the first time, reposting this article in honor of a brilliant career.

Ask any Atlanta Braves fan to name Chipper Jones‘ rallying cry when he steps to the plate and you’ll get the same answer—The opening bars to Ozzy Osbourne’s Crazy Train. For nearly twenty years, these notes amped the crowd’s adrenaline at Atanta-Fulton County Stadium and Turner Field.

Once—just once—Chipper tried to change his “at Bat” song. Did not last long. Fans protested and Crazy Train quickly returned as his trademark theme.

Braves fans know what to expect from this veteran All Star waging his last campaign in 2012. Passion, leadership… and oh yeah, heart-stopping moments when that ball zings off his bat. Over his career, about 30 percent of those at bats yielded a hit, a double, a homeroom—whatever the situation required. 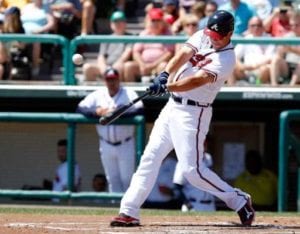 The late ’90’s and early 2000’s produced such an intense rivalry between Chipper and the New York Mets that he drove the Mets’ fans into a jeering frenzy every time he took the field. Chipper absolutely owned the New York Mets at Shea Stadium. In the 88 games that he played there, he had a .313 batting average, 19 home runs, 55 RBI. He single-handedly did more to destroy the Mets September stretch runs and post-season dreams than most New York fans will admit.

Oh, there’s no doubt they hated him. As soon as he stepped onto the field he was assailed with mocking chants of “Larrrrrrey…Larry” that continued and grew loader each time he stepped to the plate. Rather than produce the desired  effect, Larry Wayne Jones answered with his bat—usually a game-winning hit or dramatic home run. Chipper enjoyed playing at Shea Stadium so much that he named one of his sons Shea. 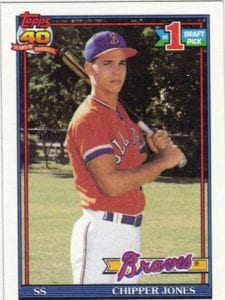 Chipper epitomizes consistency. Year in and year out he sets the same goals: 30 home runs, .300 batting average, 100 RBI. Take a look at his career stats: .304 average, 466 home runs, and 1,614 RBI. He’s the only switch hitter in MLB history who posts a lifetime .300+ average and 400 homers. He’s also earned nearly 1500 walks. That takes patience on Chipper’s part; respect from the pitcher.

Chipper had his Bad Boy moments as we watched him mature from the 21-year-old taking his first major league at bat; he even joined the ranks of Boys Behaving Badly in the late ’90’s when shortly after the 1998 playoffs, he and then-wife, Karin, publicly acknowledged Chipper’s 18-month affair with a Hooters’ waitress, that resulted in the birth of his first son. But rather than hide from the press and the fans, Chipper chose to answer questions, both on television and radio, and in print. (Tried to find a link for the one or two-hour Q&A session with fans I recall hearing on the Braves flagship radio station). His All American Boy image tarnished, his marriage ending just two months later, Chipper faced a monumental task to regain the fans’ and city’s support. The young kid who’d never had the opportunity to experience loss—on the baseball diamond—answered the wake-up call and is now among the most respected professional athletes—both by fans and his peers.

Chipper’s spent his entire career with the Braves. He’s the only member of the 1995 World Championship Team still playing on the Braves. Officially a rookie during the ’95 season, Chipper finished second in the Rookie of the Year honors to the Dodgers’ Hideo Nomo. To this day, Braves fans believe Chipper deserved the award.

It’s hard imagine a game at The Ted without #10 at third base and Crazy Train rocking the house. Watching him walk off he field for the last time as an active Brave at season end—hopefully with a second World Series ring for Chipper—will…well, maybe Neil Sedaka got it right. Breaking up is hard to do.

P.S. Fans paid tribute to Chipper this spring in a song, aptly entitled The Chipper Jones Song (after watching this YouTube clip; you can download from iTunes).