Are You Out of Your Minds, NHL? Lockout? Seriously?

Not digging what’s happening over in the NHL these days. After a season that exceeded all expectations—even for this fan without a team—we begin to hear rumblings of a possible lockout and work stoppage as owners and players seek a new CBA by September 15.

Collective Bargaining Agreements (CBAs) leave apprehension and bitter memories for professional sports fans—deservably so. Last year we witnessed two premier professional sports, the NFL and the NBA, grapple with lockouts and shortened seasons, leaving fans with the prospect—and reality for NBA fans—of seeking their football or basketball fix on the college level.

Not a bad alternative for this fan. Actually prefer the college football (Go Jackets!) and basketball (Go Duke!) to the pros.

Both sports resolved their issues, new CBAs adopted and neither league appeared to suffer any backlash. The fans turned out, the Super Bowl and NBA Finals drew record ratings. No harm, no foul for those two leagues.

Major League Baseball is another story. The 1994 season ended abruptly mid-August with a strike that extended through the end of April 1995 (remember the “replacement players” in ’95?). For the first time since 1904, no World Series highlighted October ’94. 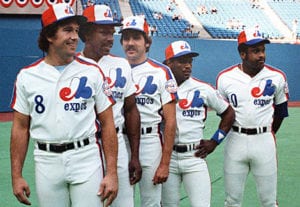 The Montreal Expos, enjoying their best season ever—77-40—most likely saw their fate sealed by not having the opportunity to battle the dominant Braves (in second place at the time of the strike) down the stretch and possibly bringing the World Series to Montreal.

Yes, you read that correctly. The “worst fans in sports” out-drew the Bronx Bombers for many seasons in the ’90’s.

The Braves and Yankees were the best teams of that era; yet the fan support expressed the country’s displeasure over the strike and lock-out. Check the attendance stats for any team. It took a good four years for the revenues to reach pre-strike/lockout levels (actually the 1993 levels). The American Pastime had betrayed its fans and the fallout exists to this day.

Unlike the NBA and NFL, there was no true viable alternative for Major League baseball fans. Sure, college baseball entertains—it just doesn’t draw the rabid fans that college football or basketball enjoy. So baseball fans had nowhere to turn. 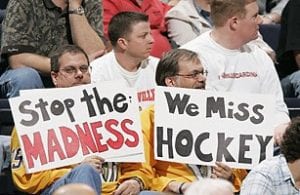 Fast-forward to 2012. Labor disputes canceled the entire 2004-05 NHL season. No Stanley Cup champion—first time since 1919. Changes implemented supposedly put the game on a firm financial footing, with the Players Association basically capitulating to owners’ demands. Salary caps. Revenue sharing. Contracts slashed across the board. Essentially the leveling of the playing field (ice) to ensure parity among all teams. With nearly every team playoff eligible until the final day of the 2011-12 season, I’d say “Mission Accomplished.” Commissioner Gary Bettman proudly announced before the Stanley Cup Final in May that the NHL earned record revenues during the 2011-12 season—an estimated $3.3 billion. The NHL implemented many positives since the ’04-05 canceled season. The Winter Classic. The Shoot Out. The fan-friendly All Star celebration. For the first time ever, NBC and its sports affiliates offered American fans 178 televised regular season games, plus every single game of the Stanley Cup Playoffs. Record revenues. Increased fan base. New ten-year broadcast agreement that guarantees US primetime coverage. What’s not to like?

Apparently, enough to threaten the 2012-13 season. With little more than a month to resolve the issue, The “L” Word begins to appear inevitable. Hey, guys, you do realize that in the US, you are not the NBA or the NFL? If there’s another lockout or lost season, the fallout south of the Canadian border will be catastrophic for many franchises. Take a lesson from the MLB’s experience in 1994. Consider where the majority of the 31 franchises reside geographically. Not in Canada.

From a fan’s perspective, enduring yet another dispute over how many millions per year a  professional athlete may earn or what share of that record $3.3 billion in revenue goes to the owners or the players is incongruous to regular folks. With the US economy in a five-year recession, unemployment at untenable highs, individual wealth evaporating, you may wish to think twice before you disenfranchise the very folks who made the past season so successful. Do you really think you can weather another lost season?

Can you guess what professional team sport does not have a CBA or ever suffered a strike or  lock-out?  (OK, back in ’69 many drivers boycotted the first race in Talladega because they considered unsafe conditions.) Somehow NASCAR manages to keep owners and drivers on the track year after year. Different culture? Different philosophy? Whatever it is, I don’t have to worry about the Chase being cancelled or February rolling around without the Daytona 500. Definitely digging that!