Last October, we checked out some of our favorite “Bad Boys”—you know, the guys you do NOT want to like, but just can’t help yourself. Those edgy, competitive guys who push the envelope—on and off the field, the court, the track, the ice—and sometimes wander just a little too close to that thin line that separates bad boys from Boys Behaving Badly. Honestly, if it weren’t for bad boys, would we really enjoy the sport(s)?

In no particular order, here’s our Bad Boys (Part One): 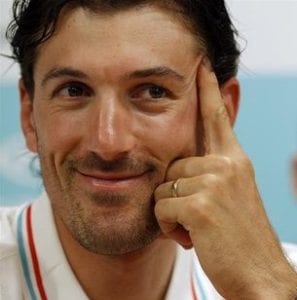 Fabian Cancellara. If you’re not into cycling, the name may be unfamiliar, but check him out—you may find yourself following a new sport. This Swiss native is a multi-year world time trial champion, a self-proclaimed gladiator who likes to be called Spartacus, a driven competitor. He achieves such speed and strength on his bike that a 2010 report actually accused him of “mechanical doping,” suggesting that somehow he managed to incorporate motorized technology into his bike. Really. In response, Cancellera scoffed that the charges were “so stupid I’m speechless.”

By the way, did I mention he is very, very nice on the eyes? Watch out for Fabulous Fabian in the Olympics… and oh yeah, sorry, girls, Fabian is married and actually left the Tour de France early to support his wife before the birth of their second child. So that kinda makes him a good bad boy, doesn’t it?

Before returning to Switzerland, Cancellara wore the leader’s maillot jaune for the Tour’s first five stages—that’s twenty-eight times in his career—a record for a rider who has never won the Tour and the most held by an active cyclist today. “When you make history in this kind of way at the Tour, it’s more special.”

Tony Stewart. Even if you don’t follow NASCAR, you probably know Tony Stewart (the adorable guy in the #14 Office Depot car/firesuit). Known to his friends—and fans—as “Smoke,” Tony’s stubbornness and difficulty playing by the rules, combined with a…shall we say smoking hot… temper, just add to his charm. He’s also an incredibly talented driver.

At one point, team owner Joe Gibbs (#20 car) directed him to race only in Sprint cup races. So, “Tony Stewart” did not race, but “Smoke Johnson” entered a few modified races. Known for speaking his mind, Smoke took some heat recently when, after Dale, Jr.’s first win in… well, a long time... he commented, “It’s not a national holiday, guys.” Junior Nation took offense, forgetting that Stewart and Junior go way back. They once teamed up on the 24-hours of Daytona (along with Andy Wallace) and dominated that endurance race. Come Daytona or Talladega, Stewart and Earnhardt, Jr. often get together as drafting buddies. That remark? Just tongue-in-cheek vintage Smoke.

Some say Tony has mellowed (matured) as a Team Owner/Driver… Maybe, but you just gotta love this guy. Totally Adorable AND single! 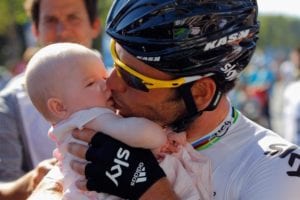 Back to cycling, watch out for the “Manx missile“—Mark Cavendish, the reigning UCI Road Race World Champion, and the only cyclist to win the final stage on the Tour de France’s Champs Élysées four times (consecutively, no less). This Brit from the Isle of Mann is brash, cocky, arrogant, and irresistible. Even when his team elected to devote its efforts in helping Bradley Wiggins win the Tour’s yellow jersey—leaving Cav without the protection of teammates in the opening week’s sprint stages, he made his own chances and rocketed to stage victories. There’s something charming about his demeanor—you’ll see it any of his post-race interviews.

Alas, this one’s another good bad guy–you should have seen him after the victory in Paris with his infant daughter (collective sigh).

Cav is going for Gold Saturday, leading Great Britain’s team in the Road Race competition in London. Don’t blink or you might miss his launch to the finish line. Oh, added bonus, Fabian Cancellara will be going head-to-head with Cav, leading the Swiss team in this competition.

On to hockey. Why is it there are so many fun bad boys in that sport? Mike Richards, Jeff Carter (Gee, how did THAT trade work out for you, Flyers?), Patrick Kane, Henrik Lundqvist… to name just a few. Let’s save them for next time!