The Little Peleton That Could… or Waiting for Godot?

Watching the opening stages of the 2012 Tour de France, you just had that feeling something dramatic would erupt from the Peleton once it arrived in the mountains. Besides the usual drama of first week crashes and hotly contested sprint finishes, the Alps and the Pyranees traditionally provide the Tour’s drama, the hold-your-breath moments, the relentless attacks on the maillot jaune, and memorable moments like the insanity of an Individual Time Trial on Alpe d’Huez back in 2004. The mountain stages, always separated by a ride across southern France, determine who deserves to wear the yellow jersey.

Bradley Wiggins and his Team Sky crew captured the yellow jersey by Stage 7—days before the Tour reached the Alps.  He nailed the Individual Time Trial before heading toward the really, really high peaks. The anticipated first foray into the Alps produced little drama in the GC, other than persistent faint rumblings that Wiggins’ teammate Chris Froome—perhaps the stronger rider—just might go rogue at any minute and steal that maillot jaune by attacking his team’s protected rider. (Think Bernard Hinault & Greg Lemond, 1985-86; Aberto Contador & Lance Armstrong, 2009. Not without precedent.) However, the Peleton exited the Alps in just about the same order it entered. No fireworks. No effective attacks. No counter attacks. Nothing to cause Wiggins to even break a sweat.

The heroes of the Alps—the breakaway daredevils venturing out in groups of three or two or solo—provided the excitement and wow! moments; the Peleton seemingly content to plod along. 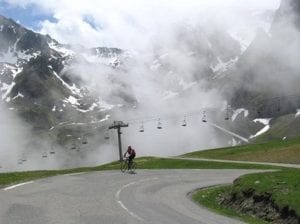 Figured they were wating for the Pyranees and the monster stage 16 that includes the Col d’Aubisque, the vaunted Col de Tourmalet, the Col d’Aspin, and the Col de Peyresourde. Surely an attack was in the works. Cadel Evans would lauch an attack; Vincenzo Nibali would follow-up with one of his own; Franck Schleck would show some of his vaunted climbing prowess; Bradley Wiggins would find himself isolated and finally forced to stand up and ride out of the saddle.

Never happened. Sure, there was a breakaway—a gutsy one by French rider Tommy Voekler who captured a stage win and grabbed the King of the Mountains jersey in one long swoop across four summits. But, the Peleton did not come out to play. Team Sky kept the pace steady—and with no disrespect for one of cycling’s favorite bad boys, Mark Cavendish—but face it, when the fastest man in the world is setting the pace in second position going up a Category 1 climb, the Peleton’s neither angry nor combative.

Not sure why, but those who’re in a position to attack the yellow jersey don’t—or won’t. Sure, no one really expects Froome to leave Wiggins breathing his dust, but Nibali did escape on a break on Stage 17 (the last day in the high mountains), bridged the gap to the lead group, then curiously spoke with a rider, politely shook hands and drifted back to the Peleton. Presumably the original breakaway cyclists hoped to keep Team Sky from unleashing its fury and pulling back the entire breakaway. But, with a maillot jane within reach, why didn’t Nibali just keep on riding? 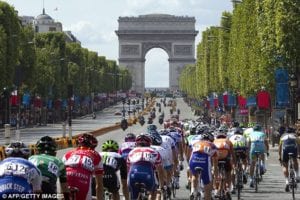 Heading into the final three stages of le tour, it’s clear that Wiggins will stand atop the podium in Paris with the yellow jersey, barring some catastrophic injury or meltdown. The remaining drama surrounds the last time trial Saturday—by tradition the maillot jaune proves his worthiness by nailing this race—and Sunday’s Sprint Finish on the cobblestones of the Champs Elysees. No cyclist has won that stage four times. Mark Cavendish hopes to claim that record.

All in all, the tour has been rather calm…excitement generated by individual accomplishments, talk of the new young cyclists—and, oh yes, let’s not forget the skirmishes between the fans and the cyclists.

Ill-advised “fans” running with lit flares that coughed smoke and singed cyclists approaching a difficult summit; hooligans scattering nails (tacks) across the road at another summit, causing over 30 punctures, one broken collarbone, and neutralizing an entire stage. Yes, you read that correctly.

Just have to wonder if many of the premier cyclists consciously held back this tour instead of pushing the limits? The Olympics start the week following le Tour, with cycling first up on July 28 and August 1. Is a Gold Medal more highly sought that le maillot jaune (or the green jersey for sprinters). Fearing that the Tour will end Sunday, with no rivalries to carry on to the next year…. Wiggins vs. (anyone)? Nothing like rivalries of years past: Lemond-Hinault, Ulrich-Armstrong, Contador-Schleck, Evans-Schleck. Heck, there’s not even anybody to dislike out of this year’s Peleton. A very strange tour, indeed.

Two cyclists discussing an attack on the ride to the summit (with apologies to Samuel Beckett):

We wait. We are bored. (He throws up his hand.)

No, don’t protest, we are bored to death, there’s no denying it.

Good. A diversion comes along and what do we do? We let it go to waste …