From the Fields of France to the Sands of Daytona: It’s Racing, Baby!

Talk about a perfect weekend! A week touring Belgium and northern France, then on to the sweet sands of Daytona. The first week of the Tour de France intersecting with NASCAR‘s mid-summer classic… life is good!

Betcha not many think the Tour de France and NASCAR have anything in common. Never really gave it much thought. One’s a European classic; the other’s as American as fireworks on the fourth of July. Cycling is a niche sport in the US; NASCAR is but a blip on the radar on the continent where football (soccer), cycling, rugby and Formula One dominate. But, you don’t need to dig deep to discover the many similarities between the two sports.

First and foremost, both are all about speed—How fast a cyclist covers the course; how fast the driver pushes his car around the track. Whether racing 45 kilometers per hour on a dangerous mountain descent or exceeding 200 miles per hour on the straightaway of a super speedway, both sports rely on highly refined vehicles that meet strict requirements. Trying to get that extra edge can result in penalties—both monetary and loss of points (NASCAR) or loss of seconds (Tour de France). Did you know there’s even a TDF rule governing the exact angle of the bicycle saddle? 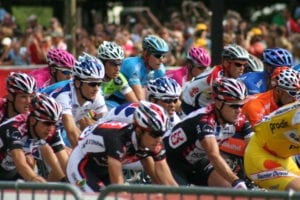 Both are individual and team sports at the same time. Drivers depend on the pit crew and other drivers racing for the same owner. Cyclists in the Tour de France comprise nine-member teams, each assigned a specific role, and all under the tutelage of a team director. The goal? Get to the finish line first.

Cycling’s Peloton is NASCAR’s Pack. Both take advantage of the slipstream (draft) to gain speed and position. Whether dashing for sprint points or racing for position, drafting sometimes produces disaster, cyclists and race cars alike crashing in spectacular pile ups.

Big difference—there are no safer barriers in cycling and cyclists are not surrounded by cutting-edge safety technology embedded within 3400 pounds of vehicle. While NASCAR’s most wicked crashes rarely produce injuries these days, a cyclist meeting pavement often results in broken bones, punctured lungs, and horrific road rashes.

Both sports depend upon sponsors to compete. Cycling kits (uniforms) are all about team sponsors, with logos easily identifiable on camera—just as race cars and fire suits serve as moving billboards. An overhead shot of the Peloton is beautiful—all the colors of the rainbow moving in unison as if a single entity. A shot of the Pack is equally breathtaking—43 shades of color sweeping around the track.

And sadly, both sports have a dark side. This weekend’s surprise last-minute suspension (just 90 minutes before the green flag) of A.J. Almendinger for failing a random drug test provides a stark similarity to the many cyclists pulled from the Tour mid-race over the years following a failed drug test. (The Tour tests stage winners daily; all riders randomly.)

Endurance is probably the biggest difference between the two sports. Riding a 100+ mile stage on the Tour equates to a 400-mile race in the hot Florida sun. But unlike NASCAR, cyclists in the Tour get up the next day and ride another 100+ miles… and the next…and the next… 21 stages (including the opening time trial—similar to NASCAR’s qualifying) over 23 days. Little time to recover and prepare for the rigors of the next day. 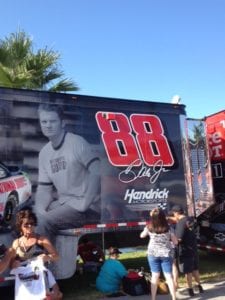 Both sports boast fans whose loyalty and antics are legion. There’s nothing like being in the stands in Daytona whenever the #88 car takes the lead—or on the side of the Alpe d’Huez as hundreds of thousands of fans crowd the cyclists as they maneuver the 21 switchbacks leading to the summit. Both produce those “Oh Yeah!” moments.

If you like NASCAR, give le Tour a chance; if you’re hooked on le Tour, tune in the next Sprint Cup Race. Warning—you could just get hooked! And be sure to look out for that Red Devil at the side of the road before each of the Tour de France’s toughest climbs! Have yet to find his equivalent at a NASCAR track. Have you?