A year ago today, the blog entry reposted below discussed the majesty and drama of the Tour de France. July had just begun, and with it the tradition of immersing ourselves into le Tour. Every second, every stage, every climb, every sprint, every time trial—guarantee we saw it; not just once, but sometimes twice—or three times—within a single day.

Fast forward a year, and July 2, 2012 marks the third day of the 99th Tour de France. Already we are captivated by the magic found on the cobblestones of Belgium over these first three days, missing some old friends, getting reacquainted with favorites riding for new teams. Haven’t picked a favorite or a team, yet. Too many friends have joined different squads. This year will present interesting dynamics. Levi Leipheimer and Chris Horner on different squads. George Hincapie riding his 17th and final Tour. Mark Cavendish challenging former teammates in sprint photo-finishes.

Watching Hincapie safely shepherd Cadel Evans through the nervously fast Peleton today… got to wondering (again!) how different the Tour record books might read had Big George been the “protected rider” for a team? Just the thought of seeing George in yellow on the podium in Paris surely brings a smile!

If you’ve never watched the Tour, you are missing a competition unlike any other. The details may vary some, but for those of you who may have just stumbled onto the Tour, this is what it’s all about—why many believe that the Tour de France—or La Grand Boucle—remains the world’s greatest sporting competition: 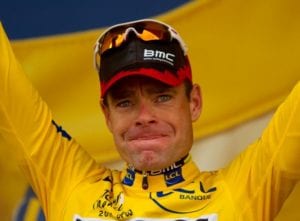 July 2, 2011, marks the beginning of the athletic endurance competition like none other. From July 2 through July 24, 198 cyclists representing 22 teams will cover 2,131 miles, riding counterclockwise through France, at a pace most of us would have difficulty covering in a car. The Tour de France IS July in our home. It has become a tradition… it has become an addiction.

We all became aware of Le Tour when Lance Armstrong burst onto the scene in such a dramatic fashion in 1999, capturing cycling’s Holy Grail, the Yellow Jersey, just three years after receiving a death sentence from advanced testicular cancer. We were fascinated by Armstrong, following him stage by stage, year by year, as he collected seven yellow jerseys. Somewhere along the way, the fascination became appreciation which translated into awe as we recognized the pure difficulty of completing a Tour de France, much less finishing on the podium.

Over the course of the 23 days, competitors will face grueling heat, chilling rain, and brutal cold as the 21 stages take them from the coastal plains through the Massif Central, up and over the treacherous Pyrenees, across the hot sunflower fields of Provence, on to the majestic crests of the Alps, before completing the 2131 miles on the cobblestones of the Champs Élysées. Oh, and did I mention that every second on the course determines the winner?

The strategy behind the competition always intrigues. Break-aways, time trials, GC riders, and the Peleton take on lives of their own. This is a sport that demands team work, sacrifice, precise calculations… the beauty of a perfectly executed Team Time Trial, the daring break-away rider who outsmarts the Peleton and captures the stage, the fearless sprinters who demonstrate that cycling IS a contact sport…the determination in the face of the cyclist fighting for the win on the “hors catégorie” climb finish.

Imagine playing 21 professional basketball games, within 23 days… or 21 football matches with little/no time for the body to recover. Impossible? Maybe. But necessary for any cyclist determined to wear that maillot jaune. (No, I’m not going to discuss doping and the accusations running rampant. That’s a story for someone else to write. I don’t care who has or who hasn’t.)

Watching Le Tour unfold stage by stage is what matters. Picking a team, choosing a couple of riders and following their odyssey creates the suspense. Vicariously touring the French countryside with Phil Liggett, Paul Sherwin, and Bob Roll as our guides is the bonus..and yes, acutely missing the presence of that man from Texas who got us hooked and taught us to LiveStrong® is the bittersweet.

I know where I’ll be the month of July. Whether in Atlanta, at the beach, or in the City of Lights…. I’m out on the course each day, enjoying every kilometer of the greatest sporting event ever!