I wear a yellow LiveStrong bracelet 24/7/365. Ever since Nike first released the original batch of 1,000,000 back in 2004. Always in support of someone I knew who was fighting cancer. Sometimes I’d sport two or three bands in particularly difficult times. The mantra “LiveStrong” represents hope to hundreds of millions of people worldwide, just as Lance Armstrong—that guy who defines LiveStrong—replaced the image of cancer victim with that of cancer warrior. 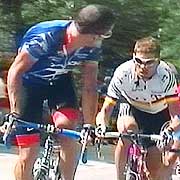 Like many, Lance Armstrong got me hooked on the Tour de France and professional cycling. The moment in 2001 when Lance looked back at Jan Ulrich before leaving him in the dust on Alpe d’Huez is one of my all-time favorite sports moments. I witnessed the final stage of the tour on the Champs Elysees. I have my “Lance Fan” from the triumphant seventh tour victory—direct from Paris. My office surrounds visitors with Tour de France promotional posters from 2004 and 2005. There’s even a signed yellow jersey framed and proudly displayed.

Lance Armstrong is my hero.

Of course, nobody could possibly be as gifted and driven an athlete as Lance Armstrong without cheating, right? At least that’s what various naysayers and organizations allege periodically throughout Armstrong’s career.

So why the witch hunt? How does Lance begin to prove a negative. He says he’s never doped. He’s passed every single one of the 500+ drug tests given by the most stringent anti-doping agencies in the world. What more can he do to prove his innocence?

And after a two-year federal investigation on Lance (same allegations) closed last year, why on earth is the US Anti-Doping Agency even starting a new investigation.

Evidently the USADA operates on the principle of “guilty until proven innocent.” (How American is that?) Lance can no longer compete in triathlons, the sport he embraced after retiring from professional cycling until he is cleared in this latest “investigation.”

Further, the USADA could strip Armstrong of his seven Tour victories—a insulting threat to the Amaury Sport Organization (ASO) family which owns runs the Tour de France and is fully capable of testing and enforcing its stringent anti-doping policies (See Alberto Contador, 2010, Floyd Landis, 2006—TDF titles stripped. Ask Jan Ulrich, Ivan Basso, and all the others rejected on the eve of the Tour in 2006 because of possible involvement with the  Operación Puerto doping case. Not because they had failed a drug test the day before the Tour. No, the ASO utilized the French Napoleonic Code—guilty until proven innocent—in that case.)

Armstrong released this statement yesterday: “I have been notified that USADA, an organization largely funded by taxpayer dollars but governed only by self-written rules, intends to again dredge up discredited allegations dating back more than 16 years to prevent me from competing as a triathlete and try and strip me of the seven Tour de France victories I earned. These are the very same charges and the same witnesses that the Justice Department chose not to pursue after a two-year investigation. These charges are baseless, motivated by spite and advanced through testimony bought and paid for by promises of anonymity and immunity. Although USADA alleges a wide-ranging conspiracy extended over more than 16 years, I am the only athlete it has chosen to charge. USADA’s malice, its methods, its star-chamber practices, and its decision to punish first and adjudicate later all are at odds with our ideals of fairness and fair play.

“I have never doped, and, unlike many of my accusers, I have competed as an endurance athlete for 25 years with no spike in performance, passed more than 500 drug tests and never failed one. That USADA ignores this fundamental distinction and charges me instead of the admitted dopers says far more about USADA, its lack of fairness and this vendetta than it does about my guilt or innocence. Any fair consideration of these allegations has and will continue to vindicate me.”

Does our government have nothing better to do than investigate athletes? How about unemployment? Housing crisis? Massive national debt? I may be just a writer and a sports fan. But this all seems utterly unnecessary, ridiculous, and a continued waste of taxpayers’ time and money.

Enough. The yellow band stays on this wrist.