February Got You Down? Think NHL, ACC Basketball, and NASCAR

Face it, the month of February doesn’t have a whole lot going for it. In the Northern Hemisphere, it’s the middle of winter—grey, dull, and depending on the mood of Punxsutawney Phil (or General Beauregard Lee down here in the South), we may face more gloom. It’s one of those months that you just get through, glad that most years it only has 28 days.

This year, however, February has simply rocked! Taking its cue from January’s lead-in with the NHL All-Star festivities, February has kept the pace in high-gear.

The “quest for a new favorite hockey team” brings an appreciation for teams previously regarded as mere opponents. The Final Four—Montreal Canadiens, Chicago Black Hawks, Nashville Predators and Tampa Bay Lightning—have delivered plenty of entertaining action this month. The Canadiens’ OT shoot-out this week against the Bruins set a high bar, even though the final result was not what this fan hoped. And of course, any time the Chicago Black Hawks defeat the New York Rangers—in their house—is cause for celebration! Complete the week with the Caps vs. the Lightning at home… life is good. And a bonus? The Canadiens just completed a trade with Nashville to bring Montreal great Boom Boom Geoffrion‘s grandson, Blake to its hallowed ice.

OK, confession time: The Caps keep trying to sneak into the Final Four—Ovechkin is just too much fun to watch when the refs aren’t neutralizing his trademark playing style. And the New York Rangers probably have the hottest starting line-up in the league—but there’s no chance this southerner will ever pull for a New York team. Period.

If you live in the South, you’re most likely either a SEC or ACC fan, and in this house, the ACC rules. Duke and Georgia Tech specifically. While Tech’s young team shows promise, Duke is giving its fans heartburn this season. Heading to Daytona (more on this later!) last night, listening to the Duke-NC State match somewhere on Interstate 10, that game was enough to test even the staunchest Blue Devil believer. Down 20 points to NC State with about ten minutes to play (Seriously, Duke? Seriously?), sheer will (Eternal optimism? Lack of programming available on Sirius?) kept the dial set to the game. When Duke took the lead for the first time in the game’s closing moments, you just had to wonder if you were dreaming… and admit to feeling just a tad badly for the NC State players. Just a tad. 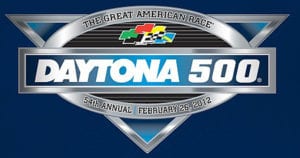 And then there’s Daytona, Speed Week, and the myriad activities leading to The Great American Race, the Daytona 500, Sunday, February 26—the official start of the 2012 NASCAR season. The drought has ended; time to brush up on who’s driving for whom, welcome Danica to full-time NASCAR racing, and eagerly await Dale Junior’s victories this year! There’s no other place I’d rather be than Daytona this week… except maybe Tampa tomorrow night when the Caps (and favorite Bad Boy Ovechkin!) face off against the Lightning.

Did I mention that I love February?