Countdown to Dayton: Beyond the “Bad Boys”—Boys Behaving Badly

Daytona is still over a month away and the NASCAR off-season buzz has surrounded the Crew Chief Merry-Go-Round, speculation on which drivers will sign with new teams and new sponsors, and the main topic—those Busch brothers and the spectacularly bad show they put on during the waning weeks of the Chase. Their actions were something that no publicist (or team owner, or mom) ever wants to witness or deal with the fallout.

We admit there’s a certain fascination with the guys you don’t want to like, but who are just too much fun not to follow… you know the athletes—Mark Cavendish, Alex Ovechkin, Zinedane Zidane (see October’s Bring on the Bad Boys) to name a few favorites. The Busch boy fall into that category most of the time.

But sometimes they join those guys who just gotta keep pushing that edge until they fall right off, landing right on their… well, you know where I’m headed with that. At this point the Bad Boys become Boys Behaving Badly.

Kurt Busch is a great example. Here’s a guy with a dream job that very few ever get the opportunity to experience. A talented driver, a fabulous sponsor, and a great team, Penske Racing. Everyone knows he’s a little trigger-happy in the temper department. But seriously, Kurt, did you really think your obscenity-laced rant towards ESPN’s Dr. Jerry Punch, a genuinely nice guy trying to do his job, would not go viral? And that great sponsor and team? Gone, in a New York minute. Do you think Kurt ever dreamed his rant would result in him driving for Phoenix Racing, whose team owner James Finch told ESPN, “He needs to simmer down a while. There are a lot of people that don’t like Kurt. He’s never done anything to me personally. He just needs to look in the mirror and see what the problem is.” Sincerely hoping the older Busch brother takes advantage of this second chance—there’s just too much talent to toss it aside… thinking that Phoenix Racing #51 may be a better fit.

And then there’s the case of that other Busch brother. Now, Kyle’s really fun to watch because he is such a fearless competitor who obviously enjoys playing the Bad Boy role. But when he allows his temper and self-importance to get the best of him as he did in the Camping World Truck Series race in Texas last November, Kyle pushes things way over the edge. By driving a competitor up into the wall, under caution, Kyle crossed the line between Bad Boy and Boys Behaving Badly. The younger Busch could have seriously injured the other driver, Ron Hornaday, Jr., and initially claimed his retaliation was justified. By the next day, Busch was apologetic. No doubt he realized he had embarrassed his sponsor and his team. Even so he was suspended from the Nationwide and Sprint Cup races that weekend and some say he nearly lost M&Ms as a sponsor. Flash forward to December—team owner, Joe Gibbs, and Sprint Cup sponsor, M&Ms, “requested” that the younger Busch not compete  in the 2012 Camping World Truck Series, and the Nationwide series remains a huge question mark. Just gotta wonder, “Was it worth it, Kyle?” What a loss to his legion of fans, not to have the fun of watching him try for three-win weekends. 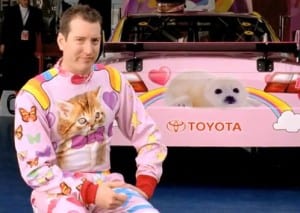 For all their bad behavior, the Busch brothers don’t pretend to be anything they aren’t. Their reputations are earned quite honestly and neither appears to seek a public image that portrays him as a role model. In fact, I suspect that beneath that brash demeanor, both Kurt and Kyle Busch are really nice guys, doing good works without dragging a camera crew along or seeking publicity. Every once in a while that “nice guy” actually sneaks through—can you ever forget Kyle in his pink Kimmy firesuit driving the puppy- and kitten- and baby-seal adorned pink Toyota in a 2010 Nationwide race?

Contrast the Busch brothers with those athletes that we put up on a pedestal, intentionally make a role model, and then are shocked and disillusioned when we watch them crash and burn in a spectacularly un-role model-like manner. I’m sure quite a few come to mind without having to name names.

Like ’em or not, the Busch brothers are genuine Bad Boys who do behave badly at times. But in this case, both have paid a serious price for their actions. But never have we held them up as role models; we certainly have never put them up on a pedestal… and to be fair, they haven’t put themselves up as such.

They’ll be back on the track at Daytona, and personally, I hope their Bad Boy wings have not been clipped too closely. NASCAR just isn’t NASCAR without those Busch Brothers charging, bumping, and challenging every turn on the track.